Member of the Month for October 2019: Antonio Fowl Stark 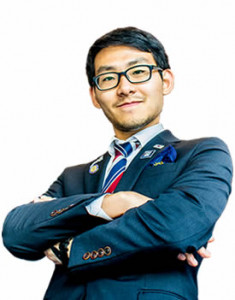 Antonio Fowl Stark (KangSan Kim) is a South Korean international business developer and space policy analyst. He has worked for startup accelerators and venture capital firms such as 500 Startups and Softbank Ventures, focusing on implementing UN Sustainable Development Goals for corporations. He has a background in policy, working for UN organizations and governments in assessing regulatory regimes for internationalization and innovation. He is currently the Brand Identity Manager at SGAC, and has been the NPoC for South Korea, Event Manager for the IAC 2019 Space4Earth Hackathon, Organizer for SG[ASEAN] 2019, and part of the organizing team for SGF 2.0 and SGC 2018. He also holds positions at the World Space Week Association, National Space Society, Conrad Challenge, Alliance for Space Development, and Students for the Exploration and Development of Space (SEDS), among others. He is a restless adventurer who has been to Arctic expeditions, hiked the Himalayas, and scuba dived in Patagonian glacial lakes.

Here’s Antonio’s reaction: “I’m incredibly honored to have been selected as Member of the Month for this month. In all of my SGAC involvements, I am constantly surrounded by individuals who volunteer their talents and time to build this community. It’s an honor to have been working alongside the greatest young minds of this decade, and I hope that my contributions assist the world in furthering our common vision”

Antonio Fowl Stark has been nominated by

“Antonio has been an unstoppable character within SGAC. I first met him in the 5th Asia-Pacific Space Generation Workshop in Singapore, where he was a moderator to one of the working groups.

I then met Antonio again in Bangkok, Thailand where he was the organiser for the Space Generation [ASEAN] Regional Workshop (SG[ASEAN]). While he was finishing up his workshop in August, he was already organising the Space4Earth Hackathon at IAC 2019 in Washington D.C.

I can’t quite believe how Antonio does all this while serving as the NPoC for South Korea and National Coordinator for World Space Week – an SGAC partner organisation. But I have a firm belief that his journey in SGAC is far from over”

“Antonio was the youngest SGAC member ever and since he encountered SGAC, he kept going above and beyond his responsibilities to contribute to the progress of the organisation and inspiring young professionals and students to get involved in space and in SGAC. In particular, as the National Point of Contact for Korea, he encouraged and managed to attract more and more young professionals in Asia-Pacific to join SGAC and become active volunteers. He also attracted partners such as KARI or GISTDA to engage with the organisation and organise joint activities. He is an outstanding young professional and is known for his versatility, working on multiple projects at once on a tight turnaround schedule. He is also an extremely talented designer and photographer, and as the brand identity manager for SGAC he clearly boosted our image and ensured our corporate identity is coherent throughout our activities worldwide.”