In times of COVID-19, SGAC doesn’t stop. Make sure to check our running webinars and online events.

You can read the SGAC Chairs’ Letter on the status of our activities.

If you want to organize a webinar, don’t hesitate to reach out to [email protected] for further information and support.

This year, SG[Germany] will hold a one-day event in Munich dedicated to advancing the role of Germany and German industry in the space economy within the next decade.
The event intends to attract students and young professionals across Germany as participants.
The program will consist of keynote speeches and panels, followed by a round of discussions where participants are split into groups and work together on proposed topics.
Therefore, the audience will have a proactive role in the event!

The event will be preceded by an optional tour of space-related facilities in Oberpfaffenhofen on Friday.

A networking reception will close the event on Saturday evening.

The language will be English since the organisers aim to be inclusive and diverse concerning participants and panel experts.

Unfortunately, we have decided to postpone the event due to the current  SARS-CoV-2 / COVID-19 situation.

It was a hard and difficult decision but we can’t risk the health and well-being of our attendees, sponsors and speakers.

At this point, we are also not sure if we could assure that the quality of the event would live up to the expectations of our attendees and sponsors, but also our own.

Currently, we are working with all sponsors to find a new date at the end of the year.

Europe and Germany boast a strong space sector. This is largely the legacy of successful and remarkable space programs carried out during the past decades, particularly those on satellite navigation, Earth observation and human spaceflight mostly built upon public support. The country’s research and development performance, the increase in the national space budget and the considerable growth of German contribution towards ESA budget committed at CMIN19+ sets a high ambition for the country to gain an even more relevant position in the European and global stage as far as space activities are concerned.

How will Germany effectively deliver on the expectation and ambition throughout the 2020s? What will Germany leadership look like in the years to come? What are the strategic priorities and main axis of action? What should be accomplished in the short-term to be better placed in the longer term?

This theme and subsequent panel will be introduced by two keynote speakers addressing where Germany stands today regarding leadership in the space sector, and what the strategies, priorities, and ambitions should be in order to deliver upon this ambition and demonstrate effective leadership by 2030.

2) Preparing and transforming the German space ecosystem by 2030: innovation, entrepreneurship and funding

The international space context is changing fast — global competition is increasing with new entrants bringing new ambitions in space and space activities are becoming increasingly commercial with greater private sector involvement. Major technological shifts, such as digitalisation, miniaturisation, mass production, artificial intelligence or reusable launchers, are disrupting traditional business models in the space sector, reducing the cost of accessing and using space. The German space sector needs to adapt to seize business opportunities stemming from those changes so that Germany and Europe can keep its leadership and strategic autonomy in space.

Realising these ambitions requires fostering investments, stimulate innovation and nurture an entrepreneurial space ecosystem in Germany and its various regions. This overarching theme will be introduced by two keynotes setting up the stage for the discussion on topics of innovation, key technologies shaping the decade ahead, funding and alternative financing, and potential synergies at the intersection of space and non-space industries.

We are offering an optional pre-event tour to the facilities of the OHB Center for Optics and Science as well as to the German Space Operations Center (GSOC) of the German Aerospace Center (DLR) in Oberpfaffenhofen near Munich. This tour takes place on Friday afternoon, the day before the official event.

This offer is limited to 30 participants and will be sold on a first come first serve basis. The tour is free of charge.

OHB Center for Optics and Science

OHB System AG is one of the three leading space companies in Europe. It belongs to the listed high-tech group OHB SE, where around 2,900 specialists and system engineers work on key European space programs. With two strong sites in Bremen and Oberpfaffenhofen near Munich and nearly 40 years of experience, OHB System AG specializes in high-tech solutions for space. These include small and medium-sized satellites for Earth observation, navigation, telecommunications, science and space exploration as well as systems for human space flight, aerial reconnaissance and process control systems.

In addition to the various clean rooms of high ISO classes, the OHB-Space Center “Optics and Science” in Oberpfaffenhofen also provides various laboratories as well as test facilities and production equipment for electronics and mechanics. We are currently working on payloads for the next generation of Eumetsat weather satellites MTG (Meteosat Third Generation), the German earth observation satellite EnMAP (Environmental Mapping and Analysis Program) as well as a number of further challenging space projects. We are looking forward to the launch of the ExoMars Rover and Surface Platform mission, since our hardware on board of the  Rover will play a crucial role in finding processing, distributing and analysing Mars samples. By the way, our colleagues in Bremen provided the ExoMars carrier module with which the lander and rover are transported to Mars. (https://www.ohb-system.de/ )

DLR Space Operations is the central institution for spaceflight operations in Germany with facilities in Cologne, Oberpfaffenhofen and Weilheim. This responsibility includes satellite missions for Earth observation, science and communication missions as well as for the exploration of the solar system and human spaceflight missions. Furthermore, astronauts are trained, space experiments are prepared and sounding rockets are developed and launched from sites around the world. Eventually, DLR works on new technologies, such as on-orbit-servicing in order to master even the most difficult space projects of the future.

OHB and DLR are located in Oberpfaffenhofen just outside of Munich. 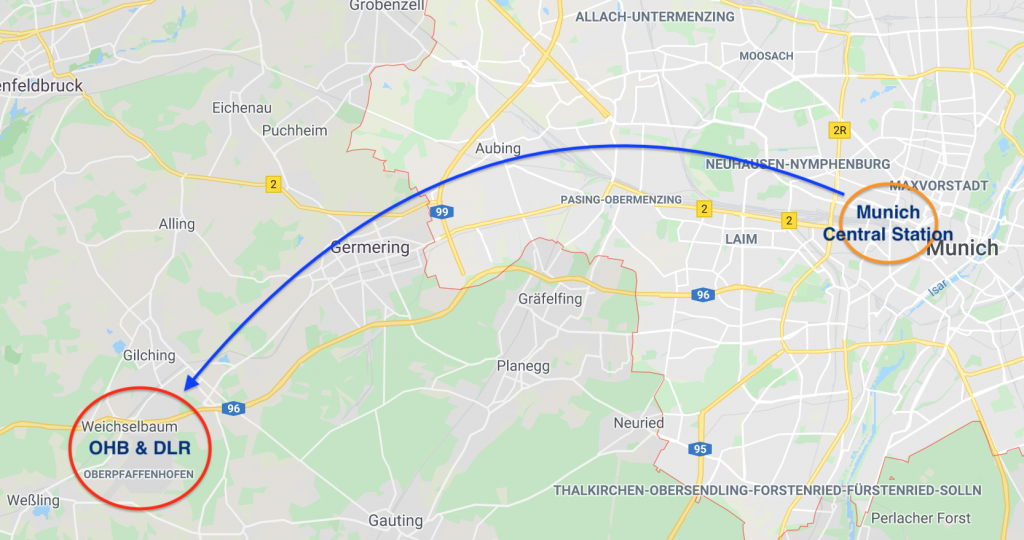 The team of SG[Germany] and SGAC thank our sponsors for their contributions. The event could not have happened without their generous support!