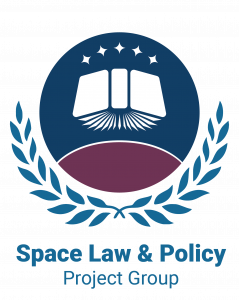 The Space Law and Policy Project Group incorporates all aspects of those two broad fields of study. It develops the term ‘space law’ as all types of space-related international and national regulations and laws, whereas it interprets the term ‘space policy’ as all kinds of objectives and action plans of the international space community.

Open to young professionals and university students of all backgrounds, the group serves as a forum to discuss space law and policy topics, looking to have the voices of the young generation heard in the global discussion on the legal, political, ethical, or other social aspects of outer space.

Dedicated to investigating and addressing current issues in international and national space topics in the coming decades, the Project Group will pursue projects relevant to the field of space law and policy, and to the broader international space community.

Background of the Space Law and Policy Project Group

The Space Law Project Group was conceptualized during the Space Generation Congress (SGC) 2011, and established in the summer of 2012. The group is the result of the initiative of SGAC members, Mr. Christopher D. Johnson and Ms. Joyeeta Chatterjee, while pursuing legal training and building careers in the intersection of the legal profession and the space industry. The Project Group changed its name into “Space Law and Policy Project Group” in 2014 to account for the strong interconnection of law and policy and to better communicate the full spectrum of its activities.

International space law began in the late nineteen-fifties in response to increased governmental interest in outer space. The major international space treaties, drafted in nineteen sixties and seventies, have many elements and principles which are well observed and which have passed into the realm of customary international law.

The first major international agreement directly related to outer space, the Outer Space Treaty, was drafted by the United Nations Committee for the Peaceful Uses of Outer Space and opened for signature in 1967. It was followed by other fundamental international treaties like the 1968 Rescue Agreement, the 1972 Liability Convention, the 1975 Registration Convention and the 1979 Moon Agreement.

The Space Law and Policy Project Group has identified the following goals:

Working with the Space Community

We aim to partner creatively and collaboratively with other civil society institutions, such as the International Institute of Space Law, and to derive synergies from the vast global network of space academics and professionals.

As a member of civil society we do not represent national or corporate interests but are rather interested in benefiting global society and humankind as a whole. However, we do not exclude collaboration with industries and governments, as long as this proves conducive to the normative framework of SGAC.

Please contact Giuliana Rotola or Kyran Grattan and and join the #space_law channel on the SGAC Slack.