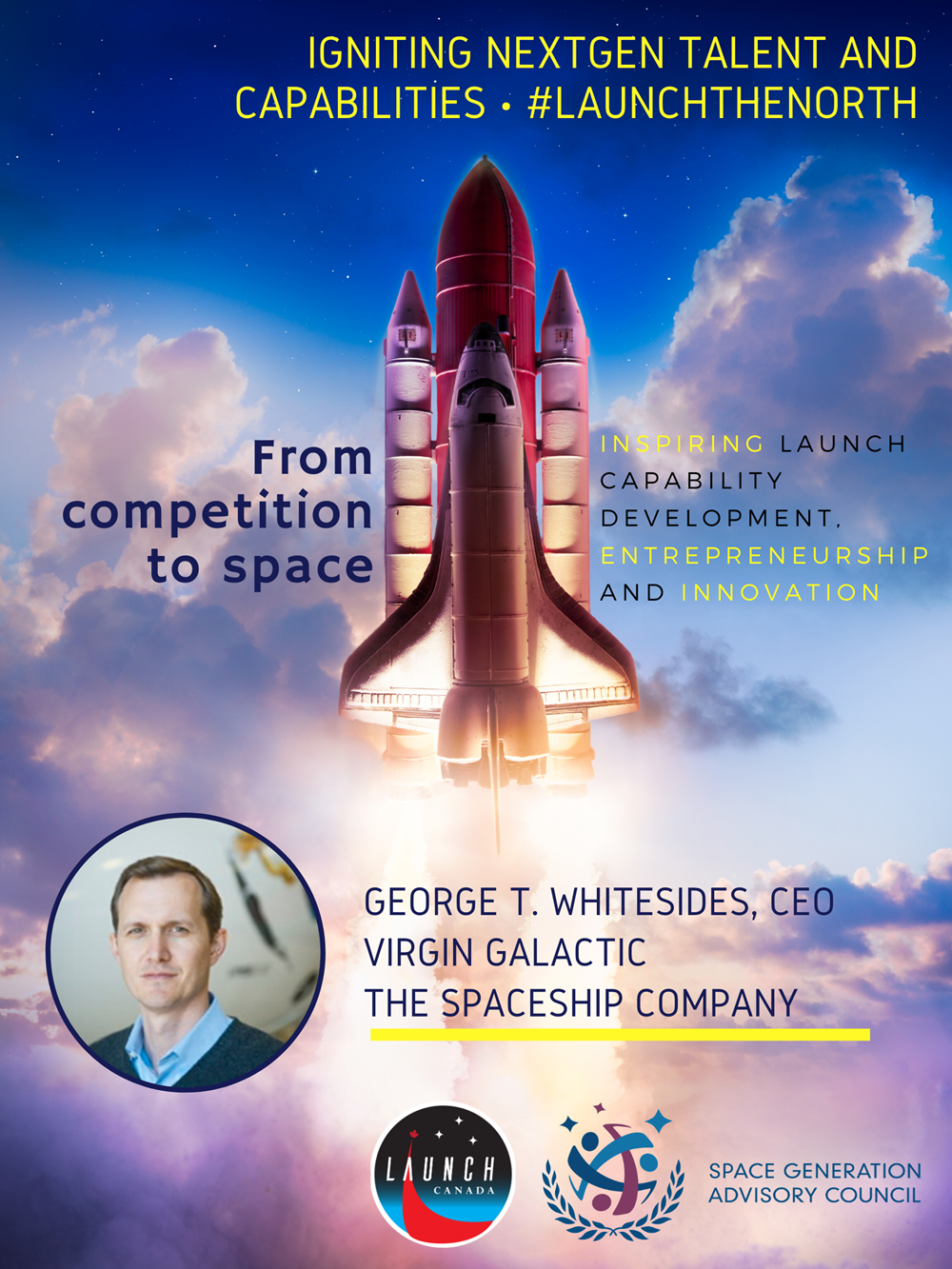 On the 10th of July, the Space Generation Advisory Council and Launch Canada will co-host a

This comes on the heels of exciting developments for private orbital and suborbital space flight.

The conversation on student rocketry challenges and innovation will take centre stage: from

competition to space, inspiring the next generation of space professionals. A notable emphasis

spaceport, while delving into innovation-driven challenges and fostering entrepreneurial

George T. Whitesides is the CEO of Virgin Galactic Holdings, a vertically integrated aerospace company
that is working to become the world’s first commercial spaceline. George leads both Virgin Galactic and
its manufacturer of advanced air and space vehicles, The Spaceship Company. George was appointed to
the role in 2010 by Sir Richard Branson, and led the transition of the organisation from a private entity
to its position today as a publicly-traded human spaceflight company, listing on the NYSE in October
2019.
Prior to Virgin Galactic, George served as Chief of Staff for NASA. Upon departure from the American
space agency, he received the Distinguished Service Medal, the highest award the agency confers.

George’s volunteer service includes boards of the Commercial Spaceflight Federation (Vice Chair),
Caltech’s Space Innovation Council, the Antelope Valley Board of Trade, Princeton University’s Advisory
Council for Mechanical and Aerospace Engineering, and the World Economic Forum’s Global Future
Council on Space Technologies (previously as co-chair). He is a fellow of the UK Royal Aeronautical
Society and an associate fellow of the American Institute of Aeronautics and Astronautics.

He previously served as chair of the Reusable Launch Vehicle Working Group for the FAA’s Commercial
Space Transportation Advisory Committee, and a member of the Board of Trustees of Princeton
University and the board of Virgin Unite USA. George has testified on American space policy before the
United States Senate, the United States House of Representatives, and the President’s Commission on
Implementation of United States Space Exploration Policy. An honors graduate of Princeton University’s
Woodrow Wilson School, George later earned a master’s degree in geographic information systems and
remote sensing from the University of Cambridge, and a Fulbright Scholarship to Tunisia. George is a
licensed private pilot and certified parabolic flight coach.

He resides in Lancaster, California with his wife Loretta and two children.