Our country, although being small, has always been geographically and politically at the centre of international cooperation on science and technology.
In 1960, the first multilateral and intergovernmental meeting on space cooperation in the world took took place in Meyrin, close to Geneva. In this conference the foundation was laid for the creation of the European Space Research Organisation (ESRO). The ESRO was founded in 1964 and was later merged with ELDO, the European Launcher Development Organisation to form the European Space Agency ESA.

In parallel, Switzerland has also been at the forefront of space science and space instrumentation. On Apollo 11, the first manned flight to the moon, solar sails were used to analyse the “solar wind”. This experiment, which was primarily developed at the Physics Institute of the University of Bern, was the first experiment conducted by humans on the moon.

These early successes have been followed by a long series of developments and contributions to space missions and technologies developed worldwide in all fields ranging from astronomy to materials science.

Claude Nicollier, the Swiss astronaut who has travelled to space four times and has actively contributed to the reparation and upgrade of the Hubble space telescope on two flights, is today professor at the Ecole Polytechnique Fédérale de Lausanne (EPFL) where he shares his experience with future generations.

Our activities at the SGAC also aim to motivate young people for a career in the space domain and to create connections with actors in Switzerland and worldwide. Join us and become part of the community.

The Swiss space sector is an important part of the European and worldwide space industry. For instance, Europe’s largest independent supplier of space subsystems and components (RUAG Space) is seated in Switzerland. At the same time, around 100 Swiss companies produce high-end products and critical technologies for space missions. About 2500 people are employed in the Swiss space sector (Source: OECD, The Space Economy in Figures, 2019). In 2016, an ESA Business Incubation Centre opened in Switzerland to support entrepreneurs to realize their innovative ideas and transfer technologies from space to Earth and from Earth to space. 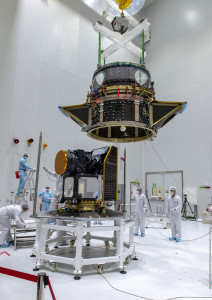 CHEOPS is being fitted into the flight adapter of the Soyuz-Fregat rocket at Europe’s spaceport in Kourou, French Guiana. It was launched on 18 December 2019. Credits: ESA.

Naturally, such activities require a strong basis in the form of highly trained specialists. Therefore, the education of scientists, engineers and professionals is a priority for Switzerland.

Space science, education and technology are closely intertwined and an example which beautifully illustrates this is the project SwissCube. This picosatellite was developed at the EPFL Space Center (now e-Space) by students together with various other universities. They developed the electronics, structure, payload and communication system, thoroughly tested the system and prepared for its launch. Since its commissioning in 2009, the picosatellite has been continuously functional to this day, highly exceeding its initially projected lifespan of one year.

The Swiss community is not only developing state-of-the-art satellite and launcher components or scientific instruments, but now also creates capabilities for space debris removal. Under the lead of the Swiss start-up ClearSpace an international consortium together ESA will develop ClearSpace-1, the first space mission to remove an item of debris from orbit. Its launch is planned for 2025.

Of course we can here only give you a glimpse of the many activities in the Swiss space domain. Check out the links below to find out more and join us at SGAC Switzerland!