Kuwait has not yet established a space program, however, within Kuwait exists a strong knowledgeable network of motivated youth who are passionate about the space industry and related areas. We believe that encouraging this knowledge within Kuwait is the best preparation for the time when a Kuwaiti space programme is finally established. The younger generation is the best fuel for bringing Kuwait closer to space related topics, so if you are under 35 year years old and believe in the importance of the space field as a source of opportunities for Kuwait, then join us!

If you are not sure about the benefits of a national space program, let us help you and feel free to contact us. 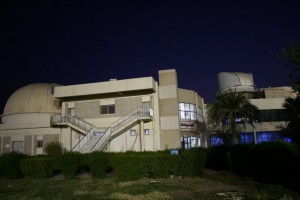 There are several interesting activities organized by the youth in collaboration with SGAC, with most of them being volunteer based projects and activities. A good example of this is the Kuwait National Radio Observatory (KNRO) which is a unique project aimed at scanning our galaxy, the Milky Way, in the radio frequency band. The project’s goals are to obtain a good map of the galaxy whilst educating the public through regular lectures about radio astronomy.

Another interesting project is the High Altitude Balloon Project with the goal of designing a balloon capable of reaching a height of approximately 30km, so that Earth’s curvature can be seen. This balloon project will consist of three stages with each stage involving specific experiments which will be done on the environment close to the space. The Kuwaiti chapter of SEDS, Kuwait SEDS, is a student group working hard to raise awareness of space among the youth, especially among students, by organizing various space-related activities.

For more information check out our interesting links section below!

SG[Kuwait] 2018
The first SG[Kuwait] took place on March 3rd, 2018. It aimed to gather Kuwait’s youth to express their thoughts and ideas on establishing a space program in the country. With the help of the local SG[Kuwait] team, 7 groups made up of 2 to 4 members (ages 18-35) were formed. Support was provided to the participants by sharing educational resources that cover space sciences, creating a template that includes important items for a space program, and by providing online mentorships. The groups wrote professional proposals to establish a Kuwaiti space program and presented them on the event day in hopes for the attention of decision-makers on a national level. 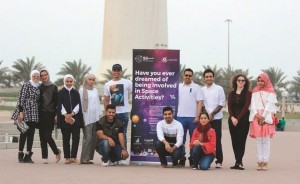 World Space Week 2018
The WSW 2018 event under the theme of “Space Unites the World” was a one-day event that is divided into two parts. First being the presentations, where some of the SGAC local members and Kuwait’s space professionals introduced the idea of Space Generation and discussed Kuwait’s involvement in this field of science and how could we help our country flourish in the space sector.

The second part being the documentary projection, where we showed the documentary “Mercury 13” that sheds light on the struggles women had to go through in order to be involved in missions to space. 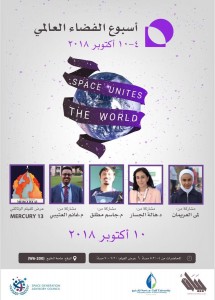 Other Space Activities in Kuwait (2018)

Activities include:
– Daily workshops on how rockets fly and how scientists explore planets.
– Daily projection of the beauty of earth from the International Space Station on Kuwait’s largest IMAX screen
– Screening of the movie “Interstellar” exclusively on the IMAX Laser projection system.
– Children storytelling and book launch of “Professor Astro Cat’s Solar System” which has been translated into Arabic
– Looking at the Moon, Mars, Venus, and other planets through a telescope
– Kuwait’s Night Sky photography competition

NASA’s Space Apps Challenge
The Center for Research in Informatics, Sciences, and Engineering (RISE) at the American University of Kuwait (AUK) organized NASA’s International Space Apps Challenge, in Kuwait. Bringing a variety of expertise ranging from scientists, coders, and space enthusiasts, to graphic designers, and business analysts to develop usable solutions to address real-world challenges related to Earth and space. 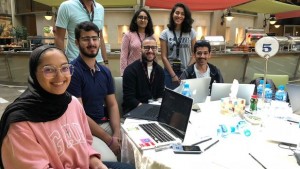 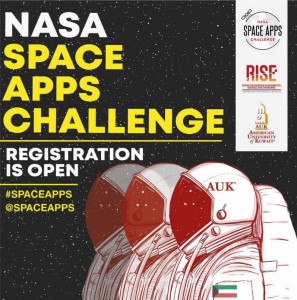 Interesting Weblinks for the Young Generation in Kuwait 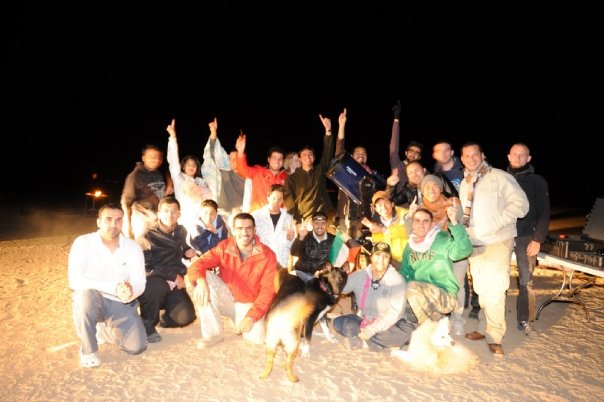 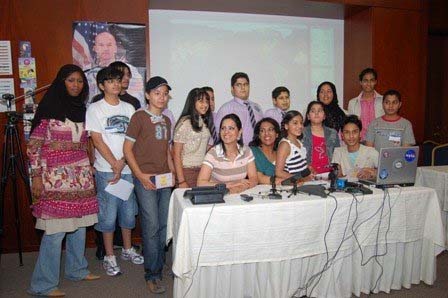