The Media and Space Travel

The Media and Space Travel: From Star Trek to NASA

“Space: the final frontier. These are the voyages of the starship Enterprise. Its continuing mission: to explore strange new worlds. To seek out life and new civilizations. To boldly go where no one has gone before.”

This is a prologue for the original series of the famous science fiction Star Trek when it was first aired on NBC on September 8, 1966, attracting over 20 million viewers during the first four episodes [1]. At that point in time, the National Aeronautics and Space Administration (NASA) was about to turn eight years old, and astronauts were already starting to travel to low-Earth orbit and perform space walks as a part of Project Gemini. This would be followed three years later, on July 20, 1969, by Apollo 11’s Neil Armstrong and Buzz Aldrin landing on the surface of the Moon for the first time in human history. 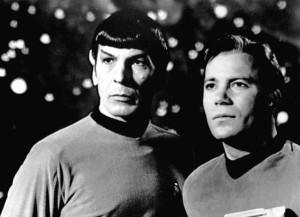 In 1969, the United States Census Bureau reported a total population of the U.S. to be approximately 200 million [2]. By then, about 93% of the households in the United States owned at least one television [3]. Hence, the 20 million viewers of the original Star Trek only consisted of about 10% of the total population. We know that almost everyone in the world tuned in to watch Apollo landing live and one might start to wonder how much Star Trek had impacted the popularity of the Moon race.

To analyze this scenario, let us first understand the influence of media on the spread of ideas and messages through the lens of a social psychologist. Malcolm Gladwell – in his book “The Tipping Point” – wrote that ideas, products, messages, and behaviors spread like viruses [4]. There are three rules that govern the critical threshold, or the tipping point, for a successful social epidemic. First is The Law of the Few, which states that success in a social epidemic requires an involvement from a small group of people with a rare set of social gifts. Second is The Stickiness Factor, which refers to something unique in the content that makes that message special. Third is The Power of Context, in which some social epidemic may benefit from the times and places in which they are starting to unfold.

Viewing the Moon race through this lens, it is not surprising that that it gained a huge crowd, despite the expensive costs of the program ($20.6 billion actual; $205.3 billion inflation adjusted [5] that could have spent elsewhere. People who advocated for the Moon race were President John F. Kennedy, highly regarded as an excellent public speaker with rare set of persuasion skills – thus meeting the requirement of the Law of the Few.

The existence of Star Trek enhanced the stickiness of the message – “To boldly go where no one has gone before” – reinforced the motivation to touch down on the Moon. Most people who watched Star Trek were teenagers [1], who might not pay as much attention to politics as adults do. This allowed the epidemic to spread across different age groups, bringing the system closer to the tipping point. The political tensions between the two giants – the United States and the Soviet Union – provided a context in which a significant portion of the federal budget could be spent on NASA’s human space program. Even though the Moon race was going to happen anyway, without Star Trek, it would probably lose a significant portion of its supporters.

In the modern era, the fame of fictional Star Trek and its USS Enterprise has faded and is now replaced by an iconic organization that exists in reality, NASA. Walking on any street corner anywhere in the world, today one can usually find space geeks of all ages wearing NASA t-shirts, caps, or other gear. NASA is the dream workplace for those who want to become an astronaut, and social media accounts often credit NASA for their sources when it comes to space-related news. NASA’s Twitter account alone has 44 million followers, which is roughly 25% of daily active Twitter users worldwide and ranks 31st on the list of most followed Twitter accounts [6].

As we move through the 2020s, the trend for receiving news has shifted from mostly television-based to internet-based. Almost everyone now has some social media accounts whether that would be Facebook, Instagram, or Twitter, and it is undeniable that our perceptions are shaped by the content that we receive on these sites. As the old saying goes – “We are what we see. We are products of our surroundings.”

Several projects under the Space Technologies for Earth Applications (STEA) project group now consider the influences of social media in the space industry in various aspects beyond just the influences on conversations about space travel and serving as an inspiration for young astronauts.

In our group, we explore the roles of social media in movements that seek to improve diversity and inclusion in the field of space sciences, the use of satellite imagery in conveying information about recent events, and the ability to mitigate impacts of emergency situations resulting from natural disasters with citizen scientists. We also hope to learn about the role of social media in the modern era of transmitting information.

After we have understood the secrets of a modern social epidemic, we, the space enthusiasts, can advocate that humanity should revisit the golden era of space travel and return to Moon where no human has visited since the last crewed mission in 1972. Star Trek world can be a dream come true for us space geeks if we work together.

Krittanon (Pond) Sirorattanakul is a PhD student in geophysics at California Institute of Technology, the very same institute which operates world-renowned NASA Jet Propulsion Laboratory. He specializes in using various observational tools including space technologies such as optical satellite imagery and synthetic aperture radar to study the mechanics of earthquakes. With SGAC, he leads several projects attempting to improve disaster management by augmenting space technologies with social media and survey data. You can find him on twitter @seismopond.