Time, distance and shielding – a radioprotective paradigm for Earth and beyond

Time, distance and shielding – a radioprotective paradigm for Earth and beyond

Humans are preparing to embark on journeys further than they have travelled before, to expand our knowledge of what lies beyond our home planet. This will be no easy task, with only a handful of astronauts ever having been beyond the protective bubble surrounding our planet, and only briefly during the Apollo missions. This bubble is known as the magnetosphere and is the veritable force field which protects us from the harsh radiation environment of space and without it, life would not exist.

Astronauts will blast beyond this safety blanket for long periods on journeys to Mars and beyond. This brings us to the time factor – it makes sense to aim to shorten the exposure to radiation. This would imply getting to and from planets quicker, something that may be achieved with faster propulsion. Our team of researchers, including an aerospace engineer based at the University of Sydney, have written a paper suggesting that using an electrical engine to speed up following launch rather than coasting to the planet could do this (Figure 1). This particular research modelled transit times between Earth and Mars using a variety of propulsion systems. Radiation doses received by an astronaut based on these transit times were then estimated utilising NASA’s OLTARIS program. 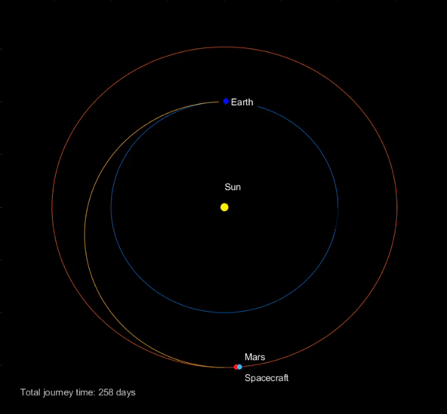 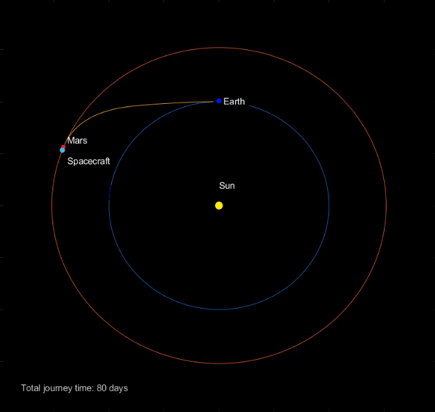 A problem with radiation in space is that it is all around and in every direction, this is the distance part of the paradigm, and astronauts cannot move further away from the radiation.

Putting something in the way of radiation like a lead apron at the dentist is known as shielding. Using thick dense materials is fine when you are getting your teeth checked, but isn’t an option in space for two main reasons. The first is that heavy materials are impractical to be put on a rocket; they are too heavy, require a lot of fuel to burn and in turn costs more money. Secondly, the radiation in space would smash into the material and generate a further radiation shower over the astronaut. High hydrogen content materials like polyethylene work well, but would still need to be used as a very thick layer around the spacecraft, bringing us back to the first problem.

Our Department of Radiation Oncology research group based at The Canberra Region Cancer Centre suggests that carbon nanomaterials may be incorporated into clothing worn by astronauts on-board the spacecraft (1). This could act as a second shield following the radiation hitting the spacecraft hull. Physical testing of materials is due to take place at the Heavy Ion Medical Accelerator in Chiba (HIMAC), Japan, with expertise from physicists and engineers from the Centre for Medical Radiation Physics at the University of Wollongong. Once on Mars, future inhabitants may need to live underground to make use of Martian soil as a protective barrier (1). Shielding using different materials is not the only way to try and block radiation. Researchers are trying to create their own magnetic field for a protective bubble around the spacecraft, this is known as active shielding.

A biological form of shielding that no longer exists merely in the realms of science fiction is hibernation. Whilst this hasn’t been trialled in humans yet, certain animal species are able to slow down their body processes in times when there is little food. Hibernation (synthetic torpor in humans) could therefore decrease the amount of supplies that may be required on-board a spacecraft but this may not be the only benefit. Experiments have shown across a number of animal species that in their hibernating state the animal is more protected from radiation compared with when it is awake. These experiments included squirrels (2), rats (3,8), hamsters (4), mice (5) and marmots (6). Similar findings have also been demonstrated in human cells (7). This may be due to a number of reasons, such as decreased metabolic rate, an environment low in oxygen or decreased temperature. We know from treating cancers with radiation therapeutically that a slowly dividing, hypoxic (9), low temperature tumour (10) is relatively resistant to radiation. However, biological shielding may not end here.

The vast majority of cellular functions in humans and animals are dictated by a day/night cycle, also known as circadian rhythm. Experiments have shown that animals that have their circadian rhythm disrupted are more sensitive to radiation than those that have a normal rhythm (11). This could have implications for astronauts who have been induced into a state of hibernation also known as torpor. It is uncertain what happens to circadian rhythm in humans during this state; it is possible the circadian rhythm is lost, particularly as there are no day/night cues in space even for conscious astronauts, as they experience 16 sunrise/sunsets in a 24 hour period while on the ISS!

Our research group, including a mathematical biologist, feel it may be important to maintain a strong circadian rhythm during astronaut torpor to facilitate a biological radioprotective state. Circadian entrainment may be strengthened by using blue light to stimulate the retina for periods of a simulated awake state along with regular feeding intervals which may be achieved by nutrition fed through tubes that enter the stomach.

Future astronauts will be moving away from the resource-rich cradle of Earth to a resource-poor planet like Mars. It is imperative that they can do so healthily on a journey to and from distant planets.

What we know so far about the interaction of radiation and humans is the result of wars and radiation accidents. This type of radiation and how quickly it was received is very different to what is expected in deep space; significant research is currently being performed to try and simulate this radiation environment (12).

The component known as galactic cosmic radiation is the omnipresent bath of highly energetic and biologically reactive particles – an aftermath of the Big Bang. These continuously bombard the spacecraft, showering the astronauts with particles, and have the ability to slice through the DNA in their cells. There are also unpredictable explosions of energy coming from the Sun, creating shockwaves of radiation, which when unshielded have the potential for life threatening, irreversible radiation syndromes. These are known as solar particle events.

Despite radiation exposure being a rate-limiting step for humans in becoming an interplanetary species, there have been advances in innovative technologies. After all, necessity is the mother of invention. Scientists have been simulating the cosmic radiation environment on ground based facilitates such as the  NASA Space Radiation Laboratory in the United States, GSI in Germany and HIMAC in Japan. These accelerator facilities use very long tracks and electricity to accelerate particles to very high speeds which then smash into materials.

Experiments are also being performed on the ISS, a true achievement of human engineering constantly orbiting above us. Moving further away beyond Earth, studies will be performed on the Deep Space Gateway, then the Moon and Mars. It may be the case that a certain amount of radiation dose will have to be accepted rather than the problem being completely solved.

Humans are not inherently designed for space, as the gravity is different on both the Moon and Mars. Without weight bearing normally, astronauts will lose muscle and bone density. They will also need to be able to live in closed, isolated environments for long periods of time, far from resources they are familiar with back home. One could imagine this will not be pleasant, and studies covering psychological evaluations on isolated volunteers are currently being performed (13).

Time, distance and shielding are radioprotective principles that should be adhered to for Earth based applications such as radiotherapy for cancer treatment, but also to aid astronaut safety on future deep space missions. There is an increasing drive for radiation mitigation strategies given the plans for upcoming human Moon and Mars missions. These strategies will no doubt be reliant on technological advances but will also be underpinned by the time, distance and shielding mantra.

Dr. Tim Squire works as a locum Staff Specialist in Radiation Oncology at the Canberra Region Cancer Centre in Australia. He has an interest in circadian rhythm response to radiotherapy and radiation protection. He has been invited to speak at international meetings and workshops including the American Radium Society, Canadian Society of Chronobiology and NASA Langley. Dr. Squire is a member of SGAC, enjoys riding his bike and spending time with his three children. You can find him on twitter @SpaceRadOnc.