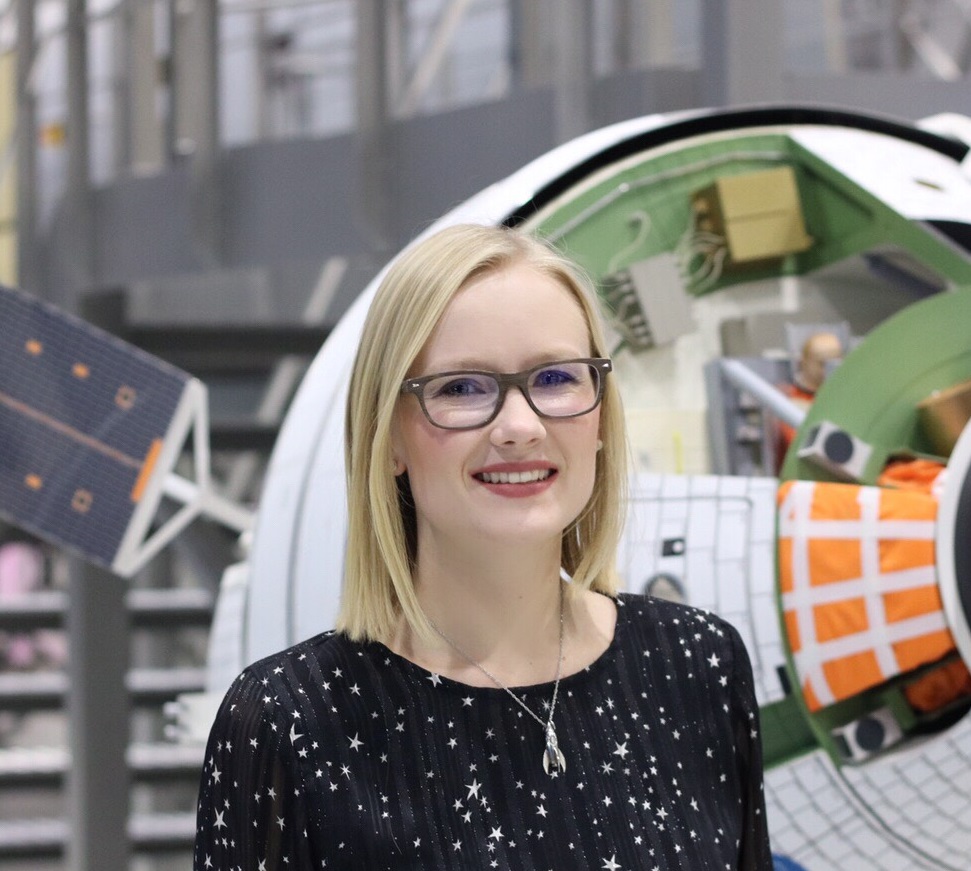 Maria grew up in Hanover, Germany and graduated with an M.S. in Aerospace Engineering in 2016 from the Technical University of Munich, Germany.

She spent one semester at ISAE SUPAERO, in France and wrote her master’s thesis at the Florida Institute of Technology in the USA. She has been involved during her studies in a student working group for rocket science working on the mechanical design of a 1U CubeSat. As a team leader, she developed a sounding rocket experiment which flew in 2015 on REXUS 18 from Kiruna, Sweden. Maria participated in several space mission design competitions and workshops, such as Space Station Design Workshop and RASC-AL from NASA. She won the DLR standout student scholarship in 2015.

After her studies she worked two years for the European Space Agency (ESA) in ESTEC in the Netherlands as a Young Graduate Trainee. In her first year, she worked in the office of the Inspector General for independent assessments and project reviews, where she gained insight about the review process and tender evaluation boards at ESA.  In her second year, she joined the Guidance, Navigation and Control (GNC) section, where she earned experience as a technical officer for an activity about neural networks from the University of Bucharest together with GMV Romania, and worked on a human mission to Mars where her focus was on trajectory optimization for entry, descent and landing. In her time at ESA she became a core member of YoungESA, a network for young staff, where she organized several events for its members. She is also a founding member of the Young Professional Advisory Group (YPAG), where they organized special events and newcomer lunches, as well as representing the trainees in the staff association and other working groups within ESA to  give the young generation a voice.

Currently she is working at the German Aerospace Center (DLR) in Cologne, Germany as an ISS payload operations engineer for the BIOLAB rack, inside the European Columbus module, and MSL, an ESA payload inside a NASA rack of the destiny module (U.S. lab).

Part of her work is to support new biological experiments from the operations point of view and to be on console as part of the Flight Control team for maintenance and experiment operations of BIOLAB. For MSL she is working closely with the NASA counterparts to perform material science in space. In addition to her activities with the space station, Maria is working on a new internal initiative for young professionals within DLR, creating a network and workshops.

Besides her job, Maria engages herself in Space Generation Advisory Council (SGAC), as her passion is space and SGAC connects space people around the world and shows the way to overcome borders. She has been acting as the scholarships coordinator since February 2018. In 2020 she was reselected as one of the two co-leads to lead the scholarships team,  which currently consist of five members, which are responsible for over 80 scholarships throughout the year.

Maria participated also in two anaolgue missions at the Mars Desert Research Station. In 2019 she was part of the international emerging space leaders crew 205, as the crew journalist and returned with crew 221 earlier this year as the crew commander. Together with five crew members, which she got to know through SGAC, they did a two weeks rotation, working on several projects related to microbiology, geology, human factors, technology demonstrators and in-situ utilization and outreach.

My story with the Space Generation Advisory Council (SGAC) starts in 2015.

SGAC is a fantastic organization with so many great members volunteering and working for SGAC, that I am truly honored to receive the Pioneer Award.

Even though I studied Aerospace Engineering, I only found out about SGAC when I was finishing with my master’s studies.

I got first in contact with SGAC through the DLR Standout Student Scholarship in 2015, which brought me to my first ever IAC, in Jerusalem. That was a magical experience. It was amazing to meet like-minded space geeks who love to talk all day about space and are as excited as me to see astronauts.

Since then, I have never left SGAC. Each year I tried to get more and more active within SGAC. First, I started to attend more regional and global events of SGAC as a delegate. Then, I became part of the space exploration working group, and later I applied to be part of the SGC event team, where I was accepted as part of the scholarships team. Every year I try to push myself to new challenges, so I have applied to different global SGAC positions. I was not successful for a long time until I finally got accepted as the SGAC scholarship coordinator, where I am working with several different teams, and we are continually extending the number of scholarships, giving back to our SGAC members.

I love the way scholarships bring opportunities to people who otherwise would never be able to attend events and experience this magic that fascinates me so much.

Engaging yourself in SGAC makes you develop your leadership and soft skills. You will learn how to discuss in teams, present your ideas and later present your results in front of a big audium, as well as how to approach and talk to CEOs, heads of agencies, and other partner organizations.

The passion that people from all around the world show within SGAC is remarkable – it reassures me why I chose to work in space instead of any other industry.

SGAC events inspire me and give me more energy and new inputs for my daily work life. I started to organize workshops and establish networks in the organizations where I worked or currently work, as I see the asset it brings to the employees as well as the management.

That said, I would like to thank Shreya from the scholarships team for endorsing me, as well as Clementine, Matteo, and Arnau, for selecting me and your kind words that brought tears to my eyes. I love working with you and spreading the word about SGAC.

I am definitely looking forward to receiving the special pin! Everyone who knows me is aware that I am probably one of the biggest space pin fans on Earth – I will wear this pin with pride.

As an Everyday inspiration for You – “If your dreams don’t scare you they’re not big enough.”