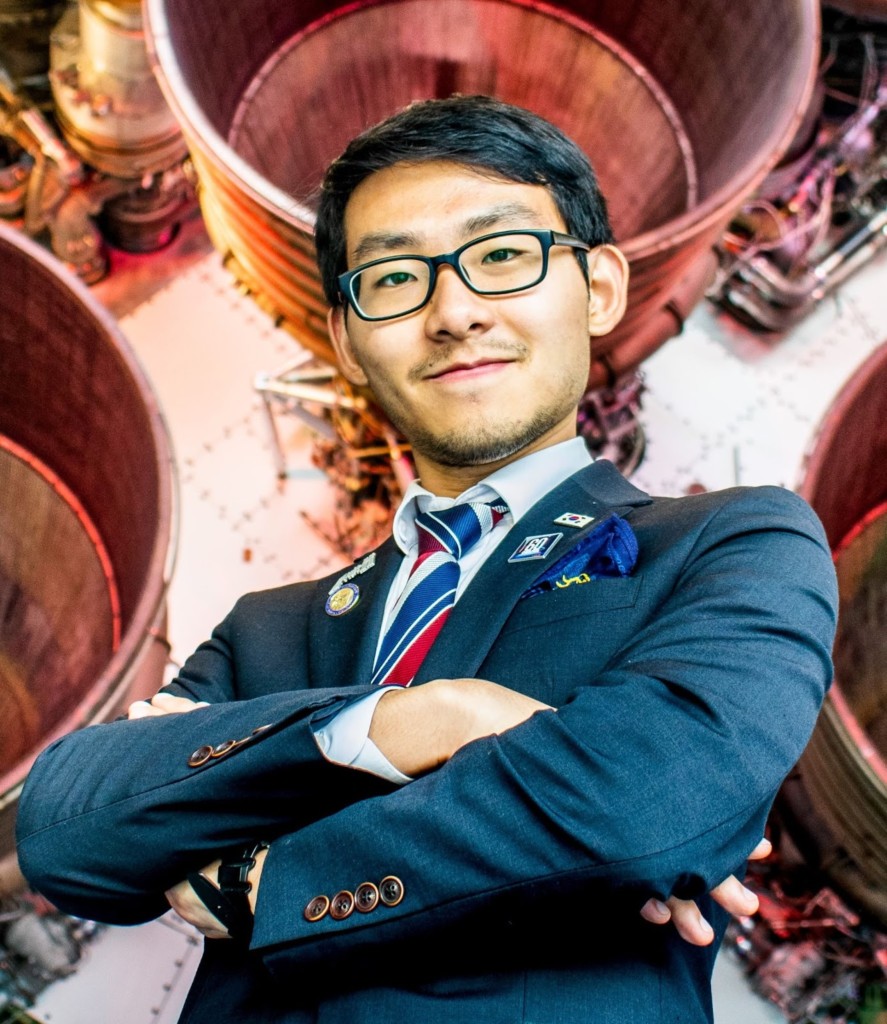 Antonio Fowl Stark [KangSan Kim] is a South-Korean born International Business Developer and Space Policy Consultant. An expedition member to the Arctic (FutureTalks Foundation) and the Himalayas (UHG Foundation), he works in providing interdisciplinary strategy and insight. His past work in sustainability at Young Sustainable Impact and the World Federation of United Nations Associations inspired him to take action for a better world – both on Earth and in space. His expertise is in global corporate strategy and technology evaluation, where he worked at global VC firms and startup accelerators like SoftBank Ventures, T-Hub, 500 Startups, Standard Graphene and Unilever.

You can find Antonio scuba diving off a coast or listening to audiobooks while training for triathlons. He keeps track of his adventures on Instagrams @antoniofstark.

“It’s difficult to give an overview of something that really feels like my daily life. I’ve been involved with SGAC for more than half a decade – which is most of my professional career. SGAC is truly the “global family” I breathe and live in, and it’s the source of passion that drives me forward every day.

It’s most humbling to see SGAC photos and recognize the ones I took. I didn’t know it then, but SGAC allowed me to be present in some of its most key moments, and I’m most thankful for the experiences and insight they have given me.

I’ve been a delegate four times to SGAC’s UN COPUOS representations. I’ve been to both the Scientific and Technical Subcommittee, and the Legal Subcommittee, where I saw the influence of SGAC’s project groups to the global, UN-level stage. I’ve been to two UN COPUOS General Assemblies and been part of working groups that set the field for key policy agendas for future discussions.

I was at the UNISPACE+50 and the SGF 2.0 event where we saw the past and the future of SGAC merge. Hearing from the first executive teams of SGAC, and listening to the moments when SGAC was born was the most humbling experience. Those two events, with all the leaders of major spacefaring space agencies present, gave me an appreciation of how far SGAC has come. We truly stand on the thousands of volunteer-hours wrought by past members.

I’ve also held so many positions within SGAC. I’ve continuously held a role at the SGAC Public Relations and Communications Team which continues to this day. The ongoing pandemic has only amplified the impact of SGAC’s online presence, and emphasized the importance of social media platforms in getting together our members. I became the first Brand Identity Manager and created so many brand logos for SGAC, including all the 10 Project Group logos and the two Programmes.

I’ve also been on the field side-by-side with our multitude of passionate volunteers. I was an organizing team member for the SGF 2.0 in Vienna, the SGC 2018 in Bremen, and the NCAC SGW 2020 in Mexico/online to see the hours of dedication into the little detail that makes each event successful. I was also the Event Manager for the Space4Earth Hackathon at IAC 2019, and the SG[ASEAN] in Bangkok. Leading the tens of team members for half a hundred attendees and dozens of speakers/partners was a growth experience that I could never forget.

There have been so many other space field activities that happened in those years that were not SGAC-related. I worked for the IAF to cover multiple sessions at IAC. I was a judge for the NASA Space Apps Challenge. I co-directed a Yuri’s Night with Tai fighters and stormtroopers, and met with congress people of both parties at Washington D.C.’s Capitol Hill. I pay my way forward by continuous involvement at the National Space Society and the Conrad Foundation in conducting space outreach for young students.

I’ve had my story flown on a Blue Origin rocket beyond the 100km mark. There were photos with Jeff Bezos, Buzz Aldrin, Bill Nye, the Expanse cast, and Jim Bridenstine. I’ve been on expeditions to the Arctic and the Himalayas. Crazy late-nights at the Lockheed Martin parties, and drinking beer made from the yeast grown on the ISS. I sat inside Lunar Habitat modules, piloted a Boeing 747 simulator, and flew the Mars Ingenuity prototype. There are so many stories I’ve been a part of at SGAC, and so much fun I’ve had with SGAC family members. It truly will take a book to tell all the stories of SGAC’s growth, and the hundreds of people who were part of its starbound journey.

Receiving this award means so much. I still remember when the pioneer award was first announced and was pinned on Anthony’s lapel. That award spoke volumes about his contributions to this organization, and the amount of respect he had from members all around the world. I’ve worked directly with 8 of the 11 past Pioneer Award winners (9 including this year’s), and I am so deeply humbled to be receiving the same award as those stellar, world-class individuals. They have worked overnight, went the extra light-year, and replied to one more email to grow this organization, and there’s no honor as touching as being recognized alongside these people I get to call friends.

Thank you SGAC, and here’s to another half-decade forward and upward!