If someone were to talk about outer space exploration—not to mention space law—in Serbia when I was beginning my space law research in 2011, this person would be welcomed with a great deal of disbelief and a demoralising reply, proposing to pursue his or her space career elsewhere, likely a more developed country. In addition, and after receiving an unrestrained persuasion relating to the non-existence of space law, this person would be characterised as someone with a lot of imagination. This was the exact situation in which I was the protagonist, and the venue was not a backstreet bar somewhere on the outskirts of Belgrade, it was a higher education institution with law as its main field of study.

Unwilling to go down the stream with general population overwhelmed with problems of living in a transitional country, but also not to leave Serbia, I was very proud to get involved with SGAC in 2012 and soon became National Point of Contact for Serbia. SGAC was a true ‘space booster’ for me, given the harsh truth that no Serbian organisation relating to space sciences existed. I relied on people who, in just few years, would go from colleagues to friends. Inspired by all opportunities in the space sector, I focused on my field of study and turned to space law on which I couldn’t find any literature in Serbia. In mid 2012, I submitted a paper entitled Legal Aspects of Space Traffic for a competition organised by my law school. The paper won the first prize, was published in a legal journal and was considered to be the first national modern space law publication. Using this opportunity, I set up a unique space science hub in Belgrade which enabled other students and young professionals to slowly get involved in space law. After enrolling in PhD studies and defending my thesis project relating to ownership rights in outer space, I was elected as an Air and Space law researcher at the same school. After receiving an Emerging Space Leader grant in 2015, which allowed me to present my research on ownership rights in space and to debut at IAC, I knew that a career had been set up for me.

Knowing about the importance of creating a specialised institution with the scope of space sciences and research, a couple of colleagues and myself founded the Serbian office for space sciences, research, and development thanks to great support by international organisations and space agencies, including SGAC, UNOOSA, and IAF. The office is an NGO with several goals, including anchoring local capacity building relating to space applications and development of space sciences in Serbia, and representing Serbia in front of international organisations. With this in mind, SERBSPACE has attended the International Astronautical Congresses since 2015 and has been present at various UNOOSA conferences since 2016 (Guadalajara, Samara, and most recently Pakistan). These conferences provide us with the needed help on what Serbia’s possibilities are in the domain of utilisation of various space programmes. The UN Pakistan conference on space applications on disaster management was of particular importance for Serbia, given that SERBSPACE presented a project developed in cooperation with the Serbian Ministry of Agriculture, Forestry, and Water Management relating to space applications. We received valuable feedback from UNOOSA. Results and possibilities presented at these events were communicated to the Serbian government and SERBSPACE became a facilitator between Serbian government and other international organisations and agencies on these matters.

Such strategy proved to be sound, and it consisted of many different and carefully taken steps. First, although SERBSPACE had drafted a Serbian Space Agency project in early 2016 detailing benefits stemming from the space sector and actions required, it was obvious that the general community would likely not react kindly. As previously stated, Serbia’s socio-economic status is not at the best, and the public is more concerned with everyday problems, not space exploration. Instead of seeking extended media coverage, we chose a different road: showing specific and practical benefits from satellite technologies, such as disaster management or flood relief, and including available space programmes within ESA or UNOOSA at no cost.

Knowing that there are many individuals either interested in the space sector or already practicing a related field, a focal point for space science was created. In cooperation with a law school, a series of space law lectures were organised covering not only legal aspects, but also wide aspects of space exploration. These lectures gathered students, young professionals, and experts from different universities, and people from both the private and public sectors. SERBSPACE successfully continued building capacity in Serbia, bringing scattered individuals under its roof and soon positioned itself as a national and international stakeholder relating to space issues. It also established cooperation with Serbian authorities in this matter.

By organising international events such as Yuri’s Night in Belgrade for the first time, SERBSPACE gathered a wider audience and helped raise the importance of space exploration and current trends regarding space exploitation and plans to use extraterrestrial materials. We partnered with several other universities, organisations, and industry clusters to facilitate talks and bring together Serbian startups and space industry. Networking allows the high number of educated people in Serbia to pursue high tech careers in Serbia, therefore rising the overall level of industrialisation. Recognising a common problem of emerging space nations, SERBSPACE has initiated the creation of MONTESPACE, our affiliate office in Montenegro, which could benefit from our lessons learned and overcome challenges. Together, the two offices presented a global project which would examine potential cooperation of developing countries and the eventual creation of Emerging Countries Space Office. 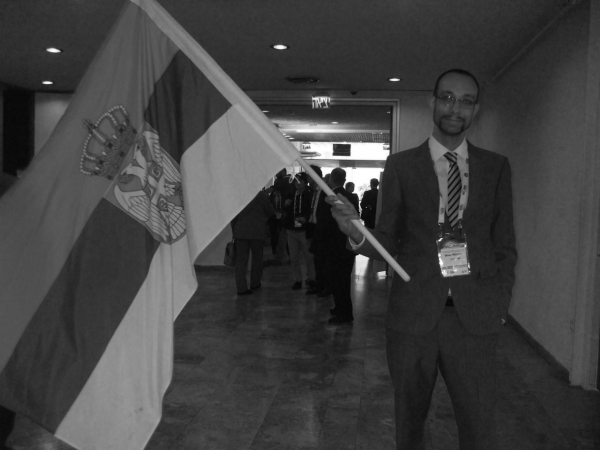 I believe, both personally and as head of SERBSPACE, that Serbia possesses a great potential, perhaps not as a space faring nation, but it needs to get involved in space activities. We believe that international and local cooperation will boost Serbia’s position among international stakeholders, and more importantly, will give opportunities to students and young professionals to get involved in the space sector.